Now That's What I Call Music 7 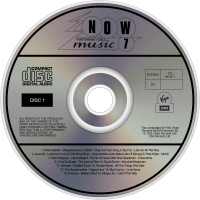 Now That's What I Call Music 7 or Now 7, released in 1986 on vinyl and audio cassette, is the seventh edition of the album in the Now! series in the United Kingdom. It debuted at number one on the UK Albums Chart, where it stayed for five weeks.

Now 7 features four songs which reached number one on the UK Singles Chart: "The Lady in Red", "The Edge of Heaven", "Spirit in the Sky" and "When the Going Gets Tough, the Tough Get Going".