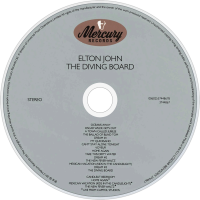 The Diving Board is the 31st studio album by Elton John. It is his 30th solo album and the second of his studio releases since 1979's Victim of Love without any of his regular band members.
The album's premiere single "Home Again" was released on 24 June 2013, the same day the album became available for pre-order. On 28 August 2013, "Mexican Vacation (Kids in the Candlelight)" was released on YouTube's Video, which acted as the album's second single

The album was written by Elton John and Bernie Taupin and produced in Los Angeles by The Union producer T-Bone Burnett. Burnett suggested that John return to the piano, bass and drums format of his very early years and the result, John says, is "the most exciting solo record I've done in a long, long time." The Diving Board was written in two days.
The album's release date was pushed back: though the record was originally planned for release in the fall of 2012, it was revealed on Taupin's website that it would instead be released in February 2013 for promotional reasons. More recently, it has been pushed back again; September 2013 is the current release date.
It was revealed on 28 September 2012 in Rolling Stone magazine that John was unsatisfied with some songs on the album and that he had started to write more new songs for the album. He believed that many of the songs had a theme and that he wanted to write more songs after sitting on the project for so long.
During a concert at the Perth Arena in Perth, Australia on 10 November 2012, Elton revealed that Voyeur's release will be pushed back further, to May 2013. The delay in release is because John will be recording more material for the album with Burnett in January 2013.
On 8 January 2013 it was revealed by Taupin's website that the title of the album had been changed from The Diving Board to Voyeur.
An article on Billboard published on 23 February 2013 revealed that the release date had once again been pushed back, this time until September 2013; the title of the album is now The Diving Board again. The article also revealed the revised track list, which includes four new songs mixed in with the original material. A song originally stated for release on the album entitled "5th Avenue" (6:18) had been dropped from the album. John called the revised album "The most piano-oriented album of my career" and said "It's my most adult album". In total the album's release has been pushed back four times.
The album's premiere single "Home Again" was released on 24 June 2013, the same day the album became available for pre-order.
On 28 August 2013, "Mexican Vacation (Kids in the Candlelight)" was released on YouTube's Video, which acted as the album's second single.