07) These Foolish Things (Remind Me of You) 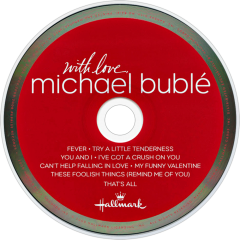 One of the top crooners to emerge during the early 21st century, Michael Bublé's romantic vocals and swinging approach are at times reminiscent of Frank Sinatra and Bobby Darin without too closely copying either of them. This special collection, With Love, put out by Hallmark Cards prior to Valentine's Day 2006, collects together eight songs from Bublé's albums between 2003 and 2005. The emphasis is on love songs (not too surprisingly), mixing together vintage standards and a few relatively newer songs that are only several decades old. Accompanied by string orchestras and rhythm sections, Bublé sounds quite warm and lightly swinging throughout. The relatively brief With Love, which is sure to become rare, is an excellent introduction to Michael Bublé's singing.