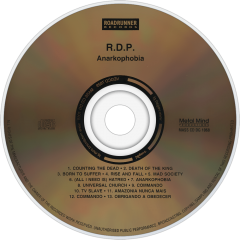 Anarkophobia is the fifth studio album from Brazilian band, Ratos de Porão – or simply known as RxDxPx. Although a hardcore punk band in their early days, since the last album RDP had been adding new influences, and Anarkophobia falls much more on the crossover thrash genre. It was released in 1991 on Roadrunner Records and follows their breakthrough record, Brasil from 1989. Like its predecessor, it was recorded in Berlin, Germany and was produced by Harris Johns.

Musically, the album showed more of a slant towards thrash metal than hardcore punk as their popularity grew, although they did include a cover version of "Commando" by The Ramones to tip a nod to their punk rock roots.

The lyrics are socio-political – more akin to hardcore punk – and was released with two versions, one in Portuguese and another in English with an emerging American and an 'out of Brazil better understanding' interest in mind.