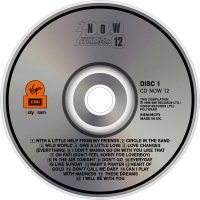 Now That's What I Call Music! 12 was released on March 25, 2003. The album is the 12th edition of the Now! series in the United States. It debuted and peaked at number three on the Billboard 200 and has been certified Platinum. With an increased number of hip hop and R&B tracks on this volume, it reached No. 10 on Billboard's Top R&B/Hip-Hop Albums chart.
Now! 12 features the number-one Billboard Hot 100 hit, "Bump, Bump, Bump".