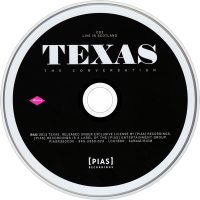 The Conversation is the eighth album from Scottish rock band Texas. It was released on 20 May 2013. Tracks are written mainly by Sharleen Spiteri and Johnny McElhone, with Richard Hawley and Bernard Butler as collaborators. The album's lead single of the same name has been released it joined Radio 2's playlist in April 2013.
The album is the group's first studio album of new material since the Red Book album in 2005.