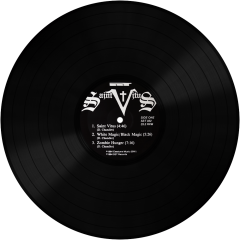 Saint Vitus is the debut album by the American doom metal band Saint Vitus, released in early 1984 via SST Records. According to Dave Chandler, the album was recorded in 1982, but was delayed by nearly two years, due to a lawsuit that SST was involved in. It was released on both vinyl and cassette, and later on CD; all three formats are currently difficult to find. "White Magic/Black Magic" and "Saint Vitus" are included on the compilation album Heavier Than Thou. Along with Trouble's Psalm 9, Saint Vitus is considered by many critics one of the first doom metal albums to be released.

"Burial at Sea" was later recorded by Goatsnake and released on their Trampled Under Hoof EP.