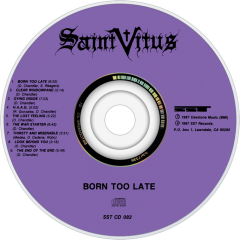 Born Too Late is the third studio album by American doom metal band Saint Vitus, released in 1986. It was the first Saint Vitus album featuring The Obsessed singer Scott "Wino" Weinrich. It is generally cited as their greatest effort.

All the songs from this album except "The War Starter" are featured on the band's compilation album Heavier Than Thou.

On April 11, 2009, "Dying Inside" was performed by the band with Phil Anselmo as a guest in New Orleans.