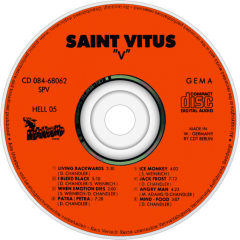 V is the fifth studio album by American doom metal band Saint Vitus, released in 1990. Its title is a reference to the Roman numeral five, not the letter "V" from the English alphabet. The album was the band's first release not on SST Records and the last one to feature singer Scott "Wino" Weinrich (until 2012's Lillie: F-65).

In 2004, Southern Lord Records re-released the album on CD and vinyl. The reissue CD contains bonus live footage from The Palm Springs Community Center on May 16, 1986.

The track "Ice Monkey" has been covered by sludge metal band Down during their live shows and "Patra" by The Kilimanjaro Darkjazz Ensemble in 2009. A line in "Ice Monkey" also inspired the name of Down's NOLA opener "Temptation's Wings".