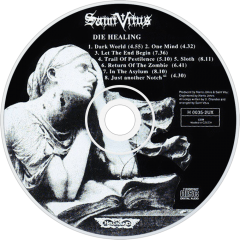 Die Healing is the seventh studio album by the American doom metal band Saint Vitus, released in 1995 by Hellhound Records. In addition to being their final album before disbanding in 1996, Die Healing saw the band reunite with the original lineup of vocalist Scott Reagers, guitarist Dave Chandler, bassist Mark Adams and drummer Armando Acosta. It would, however, be the last Saint Vitus album to feature Acosta before his death in 2010, and Reagers for 20 years until his return to the band in 2015.
In 2010, the album was reissued on limited-edition vinyl by Buried By Time And Dust Records.