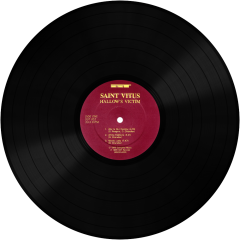 Hallow's Victim is the second studio album by the American doom metal band Saint Vitus. It was released in 1985 by SST Records. This album was the last to feature original singer Scott Reagers until their seventh album, Die Healing (1995). Reagers also appears on The Walking Dead EP that was released the same year. It remained the only Saint Vitus album not to be officially released on CD until SST officially released the album on CD in combination with The Walking Dead in 2010.