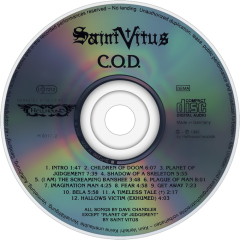 C.O.D. (also known as Children of Doom) is the sixth studio album by the American doom metal band Saint Vitus. The album was released in 1992 on Hellhound Records. This is the only album to feature former Count Raven vocalist Christian Linderson. The band had a break after this album, but reformed with original singer Scott Reagers for their next album, Die Healing (1995).