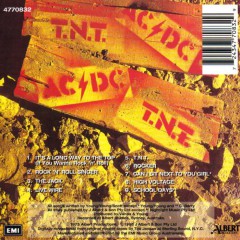 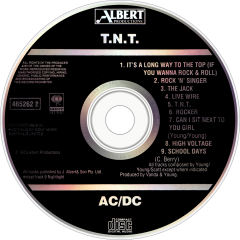 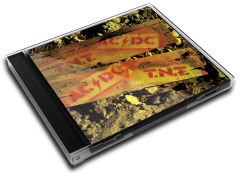 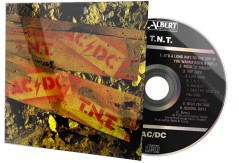 T.N.T. is the second studio album by Australian hard rock band AC/DC, released in December 1975. Seven of the album's nine songs were written by Angus Young, Malcolm Young and Bon Scott. "Can I Sit Next to You Girl" was written by Angus & Malcolm Young prior to Scott's involvement in the band, and "School Days" is a cover version of a Chuck Berry song.
It was originally released on Albert Productions, and was never reissued by another label. However, most of its contents were included on Atlantic Records' High Voltage album, which was released internationally in May 1976.

User Album Review
AC/DC's influence on Australian music shouldn’t be understated. They are one of the most important bands in my country's musical history. And their influence on “Rock” worldwide shouldn’t be overlooked either. They helped pioneer modern Hard Rock. Hell, they are Hard Rock.

Released only 10 months after their debut - the Australian version of High Voltage - this album marked an important shift in the AC/DC sound. The guitars are hard and heavy, the swagger is as prominent as ever and this is genuine Rock ‘n’ Roll. The age of the members plays an important role in the approach of this album. Angus was just a wee pup at 20 and all the other members were in their early 20s or late teens. All except for Mr. Scott that is. The brazen, captivating, coarse front-man Bon Scott was 29. He leads the way with his irrepressible cheek and flamboyant attitude. Bon Scott was AC/DC. Not to say AC/DC died with him, but from '74-'80, he was the man. The singlet-wearing, mullet-sporting Scotsman is as compelling a front-man as there’s just about ever been. And his attitude sets the tone for, and is arguably the focal point of, T.N.T..

The now iconic band- and rock-anthem It’s A Long Way To The Top (If You Want To Rock ‘N’ Roll) opens the album in appropriately arrogant style. But arrogance in a good way, not the Rap way. I mean it is a bit arrogant saying “It’s a long way to the top if you want to rock ‘n’ roll” on a Rock ‘n’ Roll album! But that is the playful cheek that is so alluring. The lyrics read like a journal-come-confession and are delivered with the passion and forcefulness that went on to become Scott's trademark. The guitar work is heavy and loud but simple as you like and the drums and bass are unnoticed. The bagpipe is used to great effect throughout. This is one of the iconic AC/DC songs, and the thumping beat is relentless for five minutes. It's one of the most widely-known and loved AC/DC songs ever. Then we move on to Rock ‘n’ Roll Singer with Scott as aggressive and forceful as ever. The lingering power chords interact adeptly with the drums and the simple guitar intro is textbook AC/DC. This is kind of the subdued, mellow big cousin of Rocker. Both are solid, rockin' tracks and reinforce the theme of a band emerging from the shadow of anonymity on to the national (at the time, soon to be international) stage. Rocker is one of the fastest AC/DC songs and Scott's raspy, rapid-fire vocals lead the line of attack. The drumming is furious and Angus breaks out into solos several times. At less than three minutes, this rockabilly number is the shortest song on the album by some distance, and as hectic, energetic and bustling as AC/DC get.

T.N.T. is the song that best sums up AC/DC. It's abrasive, provocative and full of attitude. The lyrics are full of confidence and conviction, with Scott's undeniable sense of nonchalance. “Lock up you daughter, Lock up your wife. Lock up your back door and run for your life…” The infamous “Oi!” is brilliant. It gives off the ocker (an Aussie term) attitude from the first few bars, and the larrikin spirit that so embodies AC/DC is unmistakable. As its name suggests, this is an explosive Hard Rock song and AC/DC at their finest. This is probably the highlight of the album.

The brooding, menacing Live Wire builds supremely with the crisp guitar chords introducing the drums, bass and eventually the vocals. The chorus is certainly one of the catchiest on the album. Scott’s vocals are at their most effective, ranging from subdued, almost spoken-word, to full-blooded, ballsy cries of “I’m a live wire… I'm a live wire”. The slow and the heavy are interwoven seamlessly here. The markedly upbeat High Voltage continues the cheek and attitude of the album in one of the band’s most popular and enduring songs. The song describes the sound impeccably - “High voltage, Rock ‘n’ Roll”. The guitars are again simple and distorted, and the riff played under the solo really gets the track flowing. High Voltage only helps to underline the strength of this album - a feature perhaps more prominent than on many of its descendants. The slower, sedate The Jack changes the pace and tone of the album after a relentless opening 10 minutes. Many songs the band went on to record later take inspiration from this subdued track, such as Gone Shootin’ from 1978’s Powerage and Night Prowler from 1979's Highway To Hell. It's a welcome change of tempo

T.N.T. is AC/DC’s most consistent album and arguably their best. Because of the lack of an international release, it rarely gets the kudos it deserves. This was the album that began it all for the Scottish-Australian lads. The majority of these songs have endured the test of time and are undoubted classics. This one of the best Hard Rock albums out there, and an iconic Australian album. By definition it is a true ‘classic’.