03) What Do You Do for Money Honey

07) You Shook Me All Night Long 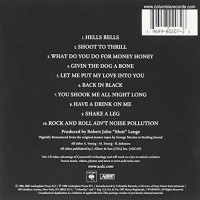 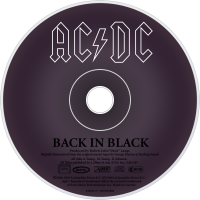 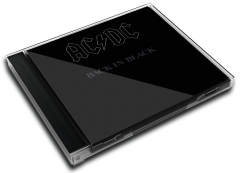 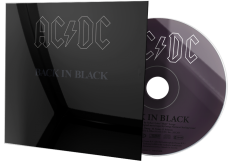 Back in Black is the seventh studio album by Australian rock band AC/DC. Produced by Robert John "Mutt" Lange, the album was released on 25 July 1980 by Albert Productions and Atlantic Records. By the late 1970s, AC/DC began to achieve significant popularity outside their native Australia, with high-energy live performances and a string of successful albums. In 1979, they paired with producer Lange and recorded their international breakthrough, Highway to Hell. Shortly before the recording of their follow-up, lead vocalist Bon Scott died after a night of heavy alcohol consumption. The group continued on with ex-Geordie singer Brian Johnson.
Back in Black was recorded over seven weeks in the Bahamas in spring 1980. The area was hit by tropical storms at the time, making the sessions difficult at times. Johnson penned the album's lyrics and melodies, while guitarists Angus and Malcolm Young composed the music. Its musical content consists of hard rock-styled numbers with lyrics relating to sex, alcohol, partying and rock and roll. Lange demanded perfection in the band's recordings, particularly on Johnson's vocals. Following its completion, the group mixed Back in Black at Electric Lady Studios in New York City. The album's all-black cover was designed as a "sign of mourning" for Scott.
Their sixth international release, Back in Black was an unprecedented success: it has sold an estimated 50 million copies worldwide. Its enormous sales figures have made it the second-highest-selling album in history. The band supported the album with a yearlong world tour, cementing them among the most popular music acts of the early 1980s. Back in Black received positive critical reception at the time of its release, and it has since been included on numerous lists of "greatest" albums. Since its initial release, the album has been reissued and remastered multiple times, most recently for digital distribution.

User Album Review
The first sound on Back in Black is the deep, ominous drone of church bells -- or "Hell's Bells," as it were, opening the album and AC/DC's next era with a fanfare while ringing a fond farewell to Bon Scott, their late lead singer who partied himself straight to hell. But this implies that Back in Black is some kind of tribute to Scott, which may be true on a superficial level -- black is a funeral cover, hell's bells certainly signify death -- but this isn't filled with mournful songs about the departed. It's a more fitting tribute, actually, since AC/DC not only carried on without him, but they delivered a record that to the casual ear sounds like the seamless successor to Highway to Hell, right down to how Brian Johnson's screech is a dead ringer for Scott's growl. Most listeners could be forgiven for thinking that Johnson was Scott, but Johnson is different than Bon. He's driven by the same obsessions -- sex and drink and rock & roll, basically -- but there isn't nearly as much malevolence in his words or attitude as there was with Scott. Bon sounded like a criminal, Brian sounds like a rowdy scamp throughout Back in Black, which helps give it a real party atmosphere. Of course, Johnson shouldn't be given all the credit for Back in Black, since Angus and Malcolm carry on with the song-oriented riffing that made Highway to Hell close to divine. Song for song, they deliver not just mammoth riffs but songs that are anthems, from the greasy "Shoot to Thrill" to the pummeling "Back in Black," which pales only next to "You Shook Me All Night Long," the greatest one-night-stand anthem in rock history. That tawdry celebration of sex is what made AC/DC different from all other metal bands -- there was no sword & sorcery, no darkness, just a rowdy party, and they never held a bigger, better party than they did on Back in Black.