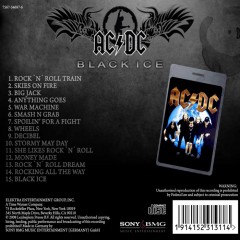 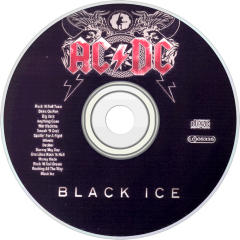 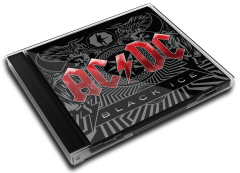 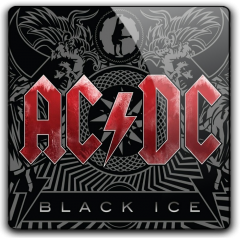 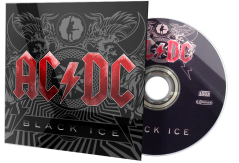 Black Ice is the Grammy-award winning 16th Australian and 15th international studio album by the Australian hard rock band AC/DC. It was produced by Brendan O'Brien and released internationally on 17 October 2008. Guitarists Angus Young and Malcolm Young met in London in 2003 to start composing tracks. The album's development was delayed because bass guitarist Cliff Williams sustained an injury and the band's change of labels from Atlantic Records to Sony Music.
The album was recorded during March and April 2008 at The Warehouse Studio in Vancouver, Canada, where the band's previous album Stiff Upper Lip had been recorded. The eight-year gap between Black Ice and Stiff Upper Lip is their longest between AC/DC's successive studio albums. O'Brien tried to recapture the rock sound of the band's early work, as opposed to the blues orientation of Ballbreaker and Stiff Upper Lip; he suggested adding "soul crooning" to Brian Johnson's singing. The songs were mostly recorded live in the studio; engineer Mike Fraser used only sparse overdubs and effects to keep the tracks as close to the originals as possible. Black Ice has the longest running time of any AC/DC studio album.
Black Ice was released exclusively in physical formats, as the group did not sell its music digitally at the time. Walmart got exclusive rights to distribute the album in North America. Its release was promoted with an extensive marketing campaign, which included displays of AC/DC memorabilia. Three singles were issued, "Rock 'n' Roll Train", "Big Jack" and "Anything Goes". Black Ice peaked at number one in 29 countries, including Australia, Canada, the United Kingdom and the United States. It was the second best-selling record of 2008, behind Coldplay's Viva La Vida or Death and All His Friends and had shipped 6 million copies worldwide by December. Critical reviews were generally positive, praising the music and its resemblance to the classic AC/DC sound, although some critics found the work too long and inconsistent. The track "War Machine" won the Best Hard Rock Performance category at the Grammys. 'Black Ice' was also nominated for many awards, including the Grammy, Brit, Juno and ARIA Music Awards; and was supported by a world tour between 2008 and 2010.

User Album Review
Unlike any other band of their stature, AC/DC truly don't care about the world at large. They see no triumph in their longevity, they long ago dismissed not only the idea of artistic statements but the very notion of artistic growth: they aren't good or bad, they simply are. They have nothing left to prove, so perhaps it shouldn't be a surprise that their albums lack any sense of urgency or motivation. AC/DC never rush to cut a record; they wait until Angus Young has collected enough riffs to hammer out an album's worth of songs, then they file in one by one to lay down their tracks with a big-budget producer, who inevitably gives them a clean, mammoth sound that's no different than what came before. Rick Rubin couldn't change this pattern on 1995's Ballbreaker and Brendan O'Brien can't change it on 2008's Black Ice. He encourages the band to add a bit of color here and there, so they grace "Stormy May Day" with some sloppy slide guitar and turn "Rock N' Roll Dream" into an expansive neo-ballad cousin of Bad Company's "Rock N Roll Fantasy," but O'Brien's crisp, colorful production only emphasizes how AC/DC could stand to be a little less careful on record.

It's the eternal AC/DC paradox: at its core, their music is brutal and primitive, but their records are slick, overly cautious, and bloated, stretching out to 15 tracks when they should be no longer than ten. AC/DC haven't lost their knack for great, simple rock & roll and Black Ice is graced by a few terrific tracks. In fact, as it opens with the "Highway to Hell" boogie of "Rock N Roll Train," the stuttering "Skies on Fire" and "Big Jack," it seems that Black Ice might be the great latter-day AC/DC record the group has yet to deliver, but as the next 12 tracks spool out over the next hour, the album slowly slides into a too-comfortable groove, fueled by too-tight rhythms and guitars that sound loud but not beefy. This polished, precise rock & roll is good enough, at least in small doses, but Black Ice delivers a whopping dose, puffed out to nearly an hour, running so long it all kind of washes together -- a problem that is endemic to all AC/DC albums after Back in Black. This shift can't be placed on the shoulders of Brian Johnson, who may never have been able to match Bon Scott no matter how much he mimics the man, but it's simply a symptom of the band's massive popularity, where they have no compelling reason to release a record every other year, so they make albums twice a decade, inevitably spending too much time sculpting their recordings when they'd be better off bashing them out. At their peak, AC/DC recorded their albums quick 'n' dirty and the music felt that way, too. Age has turned their tasteless insurgence into vulgar tradition but that's not the problem, nor is it the band's refusal to change because, let's face it, when a band does one thing this well there's no need to change. AC/DC can still sound invigorating -- and make no mistake they do here, as much as they ever do on a latter-day record -- but they just need to tighten up, cut back, crank it up, and sound a little rude again. After all, what's the point of being the filthiest band in rock & roll if you're going to make albums as polite as Black Ice?