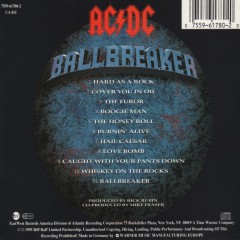 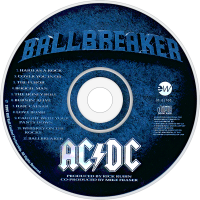 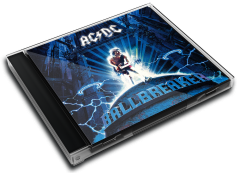 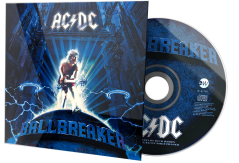 Ballbreaker is the thirteenth Australian and twelfth international studio album by Australian hard rock band AC/DC, released in September 1995. It was their first studio album in five years, since The Razors Edge. The album featured the return of Phil Rudd, who had been fired from the band in 1983 as a result of drinking and drug problems and a fight with Malcolm Young. It was produced by prolific producer Rick Rubin, who had briefly worked with AC/DC in 1993 to produce their single "Big Gun" for the soundtrack to the film Last Action Hero.
Production started at the Record Plant Studios in New York City, but the band became dissatisfied with the sound there and moved to Los Angeles' Ocean Way Studios.
Two weeks into the US leg of the Ballbreaker World Tour, four gigs were cancelled so that Brian Johnson could attend his father's funeral. During the tour, MTV cartoon characters Beavis and Butthead appeared in the intro during concerts. Five of the album's songs were played live: "Hard as a Rock", "Boogie Man", "Cover You in Oil", "Hail Caesar", and "Ballbreaker".
Ballbreaker was re-released in 2005 as part of the AC/DC Remasters series. It is currently certified 2x platinum by the RIAA in the US, for sales in excess of two million.

User Album Review
In over 20 years, AC/DC never changed their minimalist, bone-crunching hard rock. During their first ten years, that wasn't a problem, since they were still finding ways to expand and subvert the pattern, but ever since For Those About to Rock, they had trouble coming up with consistent material. Consequently, their performances tended to be a little lazy and their records didn't deliver a reliable knockout punch. Released in 1990, The Razor's Edge showed some signs of life, and their comeback culminated in the Rick Rubin-produced Ballbreaker. What makes Ballbreaker different than the albums AC/DC churned out during the '80s is simple -- it's a matter of focus. Although "Hard as a Rock" comes close, there aren't any songs as immediately memorable as any of their '70s classics, or even "Moneytalks." However, unlike any record since Back in Black, there are no bad songs on the album. Surprisingly, Rubin's production is a bit too dry, lacking the muscle needed to make the riffs sound truly earthshaking. Nevertheless, Angus Young's riffs are powerful and catchy, showcasing every element that makes him one of hard rock and heavy metal's greatest guitarists. Throughout the album, the band sounds committed and professional, making Ballbreaker the best late-period AC/DC album to date.