For Those About to Rock (We Salute You)

Track List
01) For Those About to Rock (We Salute You) 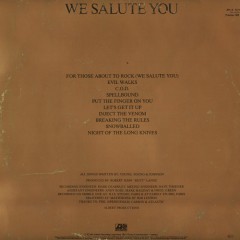 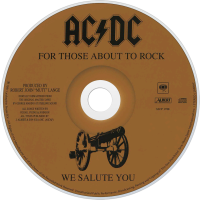 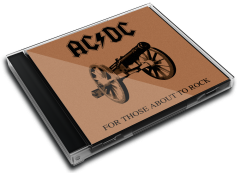 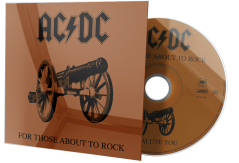 For Those About to Rock We Salute You is the eighth Australian and seventh international studio album by Australian hard rock band AC/DC, released in 1981. The album was a follow-up to their highly successful album Back in Black. For Those About to Rock has sold over four million copies in the US. It would be AC/DC's first and only No. 1 album in the U.S. until the release of Black Ice in October 2008. In their original 1981 review, Rolling Stone magazine declared it to be their best album. In Australia, the album peaked at No. 3 on the Kent Music Report Albums Chart.

User Album Review
Back in Black turned AC/DC into the undisputed kings of hard rock, especially in the US, where several of Back in Black’s songs became radio staples (for the next two decades). Of course, the record company boys over there suddenly realized the Australian dwarves became a consumer commodity and Dirty Deeds Done Dirt Cheap was released after all (yay). In the meantime, AC/DC got on the road with Johnson (his first ever concert with the band was in Belgium, by the way) and it proved to be one huge triumph. Around 1981, it seemed that AC/DC just couldn’t do anything wrong, as long as they kept the winning formula going. However, no matter how hard they tried to reach the high standard they’d set for themselves with a string of hard rock classics, they wouldn’t succeed in it for another two decades, which is not to say that those decades in between aren’t worth checking out, because they did some good stuff – despite sub-par production jobs, etc. The decline set in with For Those About to Rock We Salute You. While it’s nowhere near the disaster some people claim it is, it’s quite obvious that it’s a lesser sequel to Back in Black.

The hardcore AC/DC-fans out there will probably damn me for the previous statement, but as long as I’m not getting millions paid I can say whatever my conviction is, and For Those About to Rock, more than anything else – despite the same producer, the same sound, the same line-up and the same mid-tempo stomp – lacks memorable songs. Oh sure, the cannon fire in the title track is pretty much recognizable (in fact, those Johnson yells – “FIRE!” – are so silly they’re hilarious, and once the songs gets going it’s quite pleasant, but is there a new “Back in Black,” “Shoot to Thrill” or “You Shook Me All Night Long”? Think about it…. I already thought so. Like I argued above, the basic ingredients are still very much intact, so Johnson’s definitely not to blame – his screeching is still energetic and convincing (“No mercy for the bad if they want it” in “Inject the Venom” even sounds as if he means it). I’ve always had a sort of soft spot for the catchy “I Put the Finger on You” (no, it ain’t a song about morphology): it’s quite unremarkable when seen in its objectivity, but it’s much swifter than the majority of the songs on the album, and Johnson pulls an Ozzy during the chorus (just singin’ along to the guitar melody – although it’s probably the other way around). After “Finger,” it’s waiting for the furious rocker “Snowballad” to save the damage done by “Let’s Get It Up” and “Inject the Venom.” They both have their share of good ideas (they would’ve fit on Back in Black, although they would’ve been the weakest cuts), with especially “Inject the Venom” starting off pretty cool, but once they reach their respective choruses … Jesus Christ already, wake me up when it’s over. Oh yeah, I can’t forget the poetic opening line of “Let’s Get It Up,” either: “Loose lips sink ships.” Figure that out! The remainder of the album continues with an annoying efficiency: “Evil Walks” and album closer “Spellbound” are AC/DC by the books, but I couldn’t find anything that sets them apart, so I guess they’re average AC/DC, nothing more and nothing less. I dislike “C.O.D.” for the simple reason that I can’t stand it when a band explains an abbreviation right after it’s been mentioned. “C.O.D.” not only proves the band thought that the “evil” subject matter fit them well (“Care of the Devil”), it also goes to show they were running out of inspiration, really fast. “Breaking the Rules” has a nice light guitar sound during its verses but the stretched out line “Just keep on breaking the rules” in the chorus is so tediously slow I can read two pages of Ulysses during the same time. There’s also “Night of the Long Knives,” but the only things it reminded me off were Aerosmith and AC/DC. Man, this is one frustrating album. It’s too AC/DC to be a disaster (that makes sense, right?), with a clear sound, good overall performances, etc. It’s just that the memorable riffs and songs are lacking, and that’s kinda sad, considering they once turned in one monster riff after the other.