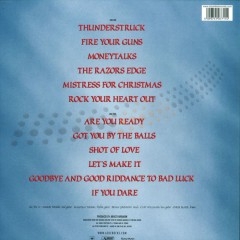 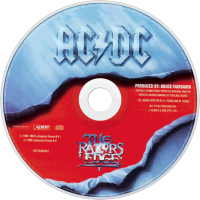 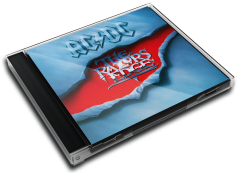 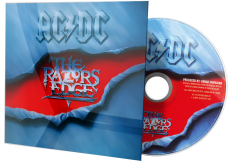 The Razors Edge is the 12th Australian and 11th international studio album by Australian hard rock band AC/DC, released on 24 September 1990 on Atco Records. It is the only studio album to feature drummer Chris Slade, and includes "Thunderstruck" and "Moneytalks," which are among AC/DC's most well-known tracks. The album reached #2 on the US Billboard 200 and #4 in the UK, a smash commercial success that returned the band to the popularity of its glory years of the late 1970s and early 1980s. The album has been certified 5x platinum (5 million copies sold) in the US, and was re-released in 2003 as part of the AC/DC Remasters series. The album was produced by Bruce Fairbairn. Malcolm Young, having completed his rehabilitation for alcoholism, once again played rhythm guitar and co-wrote (with his brother Angus) all the songs on the album.

User Album Review
The 80s were not very kind to AC/DC. After releasing Back In Black (you may have heard of it) the boys were under pressure to bring out an album that was as good, if not better than BIB. Sadly, this never happened, although albums like: For Those About To Rock and Flick Of The Switch are good in there own right, they didn't have that certain quality that made BIB such a fantastic record. By the time Blow Up Your Video was released, people had forgotten who AC/DC were and fans had all but given up on there beloved band...

Until they released THE RAZORS EDGE. This album was a kick in teeth for most fans, as most were expecting another ***ty album. But AC/DC said no, and instead released there best album in years. One of the great things about the record is the sound, the band sound pumped and ready to play rock 'n' roll, while they sounded tired and didnt give two pigeons on there previous efforts.

There new drummer Chris Slade is a machine, although the groove that Rudd had isn't as prominent, Slade makes up for it by the sheer force and power he presents throughout the album. The last thing you will notice is Brian's vocals, they have a much more raspy quality than on previous records, and although they dont sound as good as they once where, they still have that classic Johnson groove.

The album opens with Thunderstruck, which goes along side songs like Back In Black and Highway To Hell as one of AC/DCS most well known songs. The main riff has more in common with a lead solo than it does a rhythm part, which makes it unique as no other AC/DC song has that. The song as a whole is fantastic and a fan favorite. Fire Your Guns follows, and is more like the classics the band have wrote in the past with a fast, simple riff, a catchy chorus and a bluesy solo from Angus, all make for a great package from the boys.

Moneytalks is the most upbeat song on the album, with a cheery riff and a ridiculously catchy chorus, its another great song. The Razors Edge is more serious song which is due to the riff being very ...I dont know, but its not your average AC/DC riff. The song itself is very enjoyable and props to the Young brothers for writing such an awesome riff. Are You Ready has a great chorus and a great riff (its AC/DC, how do you expect me to say that this is a great song).

After those 5 songs, the album goes into hit or miss mode. Mistress For Christmas has a very cheesy Christmas riff and doesn't deliver anything amazing. Rock Your Heart Out is a boring, poorly written song, as are Goodbye And Good Riddance To Bad Luck and If You Dare. Shot Of Love and Let's Make It are both good track but, again nothing special.

So overall, The albums positives far outweigh its negatives. The first 5 songs I mentioned are among the best the boys have ever written while the other 2 I said were good are by no means bad, and the production, tight performance and the lyrics only help to make all those songs better.