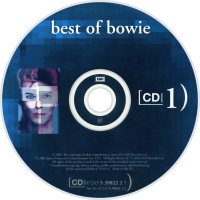 Best of Bowie (2002) is a career-spanning greatest hits album by multi-platinum recording artist David Bowie. The songs range from his second album (1969) to 2002. It was released 35 years after his first album, David Bowie.

Album Review
British suburbia has a lot to answer for. In the stultifying post-war aura of austerity young minds were thrown into turmoil. On one hand convention defined growing up as something messy, to be passed through as quickly as possible; on the other hand something happening in America hinted that there was more to youth than speaking when spoken to. In Dartford young Michael Jagger got the itch. In Muswell Hill Ray Davies started practising with his brother, and - a few years their junior - in Bromley, David Jones dreamt of emulating these new heroes. After all they were from the sticks, just like him. Over 40 years on David Jones, out of all the aforementioned, still seems to have the ability to surprise. Just look at this album. It's got more variety than Heinz...
Best Of brings the story right up to date. Released in 22 different versions across the globe (the one song common to all being ''Fame'') and accompanied by a remastered DVD, this package is as near perfect as it can be. Disc one takes us from his 1969 career-breaker ''Space Oddity'' up to his first personal crisis (the usual stuff: drugs, occultism, flirtations with right wing imagery) in 1975. On the way you meet all those favourites, more like old friends than actual songs.
Hunky Dory's piano-led beauties (''Oh! You Pretty Things'', ''Changes''), Ziggys hard-riffing pop classics (''Starman'', ''Suffragette City''), the glam overkill of Aladdin Sane (''Jean Genie''), Pin Ups (''Sorrow'') and Diamond Dogs (''Rebel Rebel'') and top marks for the inclusion of the title track of neglected masterpiece The Man Who Sold The World. From there it's all plastic soul and fragile beauty as our Dave gets a little lost in a cocaine blizzard. You can almost hear the click of razor on mirror in songs like ''Golden Years'' and ''TVC15''.
CD two, as with all chronological examinations of great people's careers, shows a little slacking off. With Dr Eno to ease him through the withdrawal in Berlin, we get gems like ''Sound And Vision'' and ''Boys Keep Swinging''. Despite the aberration of ''Under Pressure'' the new methodology held through his last masterpiece Scary Monsters, and then the curse of the 80s fell across Bowie's life. The shiny beast that is Lets Dance had all the seeds of ruin within it. The only trouble was that Dave was shipping so many units that he didn't notice it all going awry. ''Blue Jean'' barely exists, so formulaic is it, and one can't help but think that ''This Is Not America'' was beautiful because of Pat Metheny's measured touch. Tonight was not his finest moment though ''Loving The Alien'' does have a strange distant beauty to it. Like watching a ballet through a telescope.
Bowie must be gutted to this day that when he finally got to play with one of his teen idols, Mick Jagger,it was on the charity embarrassment ''Dancing In The Street''. It was to be a good eight years before it all came right again. The reunion with Eno on 1.Outside yielded ''Hallo Spaceboy'' (remixed here by the Pet Shop Boys) while the follow up Earthling showed that he'd actually started listening to contemporary music again. The drum 'n' bass fury of ''Little Wonder'' is splendidly edgy.
Which leads us up to the most recent addition to the canon: ''Slow Burn'' from Heathen demonstrates that there's more than enough life in this South London dog yet. Recent gigs have been joyous celebrations of both past and present. With this exemplary compilation under his belt maybe we can look forward to more of the old restless spirit which always marked his best work. He's not ready for suburbia just yet.