Legend: The Best of Bob Marley and the Wailers 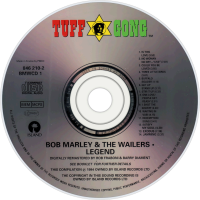 Legend is the twelfth album by Bob Marley & The Wailers, and the second posthumous album, released in 1984 by Island Records, catalogue BMW 1 in the United Kingdom and A1 90169 in the United States. It is a greatest hits collection of singles in its original vinyl format, and the best-selling reggae album of all-time, with over 14 million copies sold in the United States and approximately 25 million copies sold globally. In 2003, the album was ranked number 46 on Rolling Stone magazine's list of the 500 greatest albums of all time. It contains all ten of Marley's Top 40 hit singles in the UK up to the time, plus three songs from the original Wailers with Peter Tosh and Bunny Livingston in "Stir It Up," "I Shot the Sheriff," and "Get Up, Stand Up," along with the closing song from the album Uprising, "Redemption Song." Marley enjoyed fewer chart hits in the United States, "Exodus," "Waiting in Vain," "Could You Be Loved" and "Buffalo Soldier" the only ones included on this collection. Of the original tracks, only four date from prior to the Exodus album.
The cassette tape release of the album featured two extra songs, "Punky Reggae Party," the b-side to the "Jamming" single, and "Easy Skanking" from the Kaya album. A second generation compact disc remastered by Barry Diament appeared in 1990 on the Tuff Gong label. Although the disc includes the same fourteen songs, the tracks are in their original album lengths rather than the edited versions for single release.
On February 12, 2002, the expanded fourteen-track edition with songs at album lengths were remastered for compact disc with a bonus disc consisting of 1984-vintage remixes for extended dance club singles and dub versions. In 2010, Legend was made available as downloadable content for Rock Band. However, it was released without "Get Up, Stand Up", which was later included on Rock Band 3.