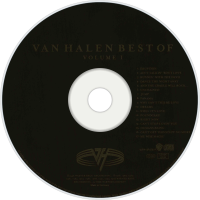 Best of Volume I is the first compilation of studio tracks by American hard rock band Van Halen, released in 1996.
The material is from nine of the band's first ten studio albums. Nothing from the band's Diver Down album was included. Best of Volume I also features "Humans Being," the band's contribution to the Twister soundtrack. The two newly recorded songs, "Can't Get This Stuff No More" and "Me Wise Magic," at the end of the album are with original vocalist David Lee Roth. These two songs were released as singles to promote this compilation. They are also the last songs recorded by the original Van Halen lineup of Eddie Van Halen, Alex Van Halen, David Lee Roth and Michael Anthony. The Van Halen Brothers would not record again with David Lee Roth until the album A Different Kind of Truth, released in 2012. Michael Anthony has not played with Van Halen since 2004.
Initial pressings of the album contained an alternate edit of "Runnin' with the Devil" where the verses, chorus and solos were arranged in a different order than that of the original album version. It was reported that this was accidental and subsequent pressings have replaced this version with the one found on Van Halen. However, some radio stations still play this erroneous version of the song.
The album itself, while not controversial, sparked a great deal of in-band controversy because of the personnel issues surrounding the band at the time. Sammy Hagar, who by this time had been a member of Van Halen for 11 years, equal to the amount of time as the previous vocalist, David Lee Roth, left the band in June 1996 due to a number of unclear circumstances. Some sources reported that Hagar was dissatisfied with the decision to issue a "greatest hits" collection, and was instead more inclined to do an entirely new album of new material. In either case, the band announced that Hagar had left the band and the band was instead working with David Lee Roth on new material for inclusion on the disc. This was not to last, as Roth and Edward clashed publicly and the band once again was without a lead singer, before hiring Gary Cherone. All songs except "Humans Being", "Can't Get This Stuff No More", and "Me Wise Magic" are included on The Best of Both Worlds.
Despite the aforementioned friction, the album went on to win Metal Edge magazine's 1996 Readers' Choice Award for "Best Hits or Compilation Album." Hagar shares the accolade with Roth, since the album features material from both singers. Also, the song "Humans Being" (featured on both the album and the Twister movie soundtrack) was voted "Best Song From a Movie Soundtrack."