Over the Hills and Far Away 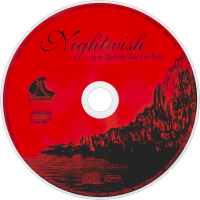 Over the Hills and Far Away is the first EP by Finnish symphonic metal band Nightwish, released in 2001 by both Spinefarm Records and Drakkar Records. The bassist Sami Vänskä would leave the band after the recording of this CD, due to musical differences between him and Tuomas, and was replaced by the current bassist and male vocalist, Marco Hietala.
The editions by Drakkar and Century Media bring different live tracks from the live album and DVD From Wishes to Eternity, recorded at Tampere, Finland, on December 29, 2000.
The EP debuted at number one on the Finnish Singles Chart and spent twelve weeks in the top three, topping it for another four weeks and spending six weeks at number two. It charted for a total of 49 weeks, including two weeks in early 2004. The EP was awarded double-platinum certification in Finland in 2006 and has sold over 36,000 copies to date, becoming the sixth-best-selling single of all time in Finland. Over the Hills and Far Away entered also the European charts, in the Top 100 of Germany, Belgium, Austria, Netherlands and Switzerland.[citation needed]
The EP has two new songs and a remake of Angels Fall First's "Astral Romance", sung by Tony Kakko beside Tarja Turunen. The title song is a cover from the Northern Irish singer and guitarist Gary Moore, and has backing vocals by Tuomas Holopainen, Tapio Wilska and Kakko; Wilska also sings on "10th Man Down".