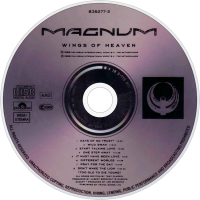 Wings of Heaven is the seventh studio album by British melodic rock band Magnum, released in 1988.
The original choice of producers for Wings Of Heaven was Roger Taylor and Dave Richards, who had produced Vigilante. This wasn't realised due to conflicting schedules. Albert Boekholt was suggested at Wisseloord Studios, Holland. The album was mixed at Sarm West Studios, London in January 1988. One song was announced, "That's How The Blues Must Start" but was dropped from the album. The album is certified Silver in the UK for over 200,000 sales.
In November 2007 Magnum toured the UK celebrating the 20th Anniversary of the album. These shows were recorded for the Wings of Heaven Live album in 2008. The entire album was played live including the song "Different Worlds" never performed by the band on the original Wings of Heaven tour in 1988.