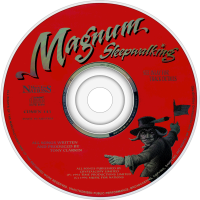 Sleepwalking is the ninth studio album by British melodic rock band Magnum, released in 1992.
Following the decision to leave Polydor, Sleepwalking was recorded within six months, and is the first self-produced album by Magnum since The Eleventh Hour. Tony Clarkin was much happier acting as producer, following his working relationship with Keith Olsen on Goodnight L.A.. Learning from Keith Olsen, Tony had enough experience to produce Magnum's records on his own, also being the best option to cut production costs for future albums.
"Only In America" was lifted as a single, but following poor sales figures, the second single, "You're The One" was cancelled.