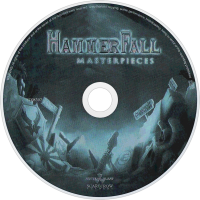 Masterpieces is a compilation album by power metal band, HammerFall.

The CD consists of all the cover versions recorded by HammerFall to date plus three new unreleased songs (marked with asterisks in the track listing below).

The album cover makes references to the bands being covered by HammerFall, including a Twisted Sister logo spray painted on the wall, a shield with the Warlord logo on it, a stone with the Pretty Maids logo, a pumpkin (Helloween), a Japanese Rising Sun Flag (Loudness), an arm holding a guitar buried on the ground (Rising Force) an 'E' logo of Europe, a razor with Swedish steel written on it (Judas Priest) and a sign indicating Detroit referencing Kiss's Detroit Rock City. The Park Av. sign is in reference to Skid Row's "Youth Gone Wild," which contains the lyrics "I tell ya Park Avenue leads to Skid Row." The green-haired zombie is from the cover of Picture's album "Eternal Dark", and the Swedish flag refers to Roger Pontare's representation of Sweden in the 2000 Eurovision Song Contest.