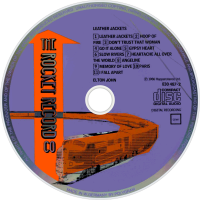 Leather Jackets is the 20th studio album by British singer/songwriter Elton John, recorded at Sol Studios in England and Wisseloord Studios in the Netherlands, and released in 1986. It was his first album to not create any top 40 singles in either the US or the UK since 1970's Tumbleweed Connection, which had no singles released from it. It is also the poorest-charting album of his career.

In 2006, John declared this his least favourite of all his albums: "Gus Dudgeon did his best but you can't work with a loony." He's also been quoted as saying there were some records where he was "not together at all" and cited this album as an example. With its biker cover, he said it was "very butch but a total disaster. I was not a well budgie, I was married and it was just one bag of coke after another."

In 2001 Elton regarded Heartache All Over the World as the worst song he'd ever recorded, calling it "pretty insubstantial".

In 2000, Gus Dudgeon said: "There was a chance he could polish himself off. He'd go out and do some coke and it'd be all over his mouth, his nose would be running and I'd go: 'Oh God, this is just awful'."

"Heartache All Over the World" was the only single to achieve chart success in the US, though it failed to crack the top 50. "Slow Rivers" is a collaboration with Cliff Richard that was released as a single in the UK. Cher collaborated with "Lady Choc Ice" (actually John himself) to write "Don't Trust That Woman".
Roger Taylor and John Deacon of Queen play drums and bass guitar respectively on the track "Angeline".

This was John's last studio release to be produced by Gus Dudgeon and his last in which he played a grand piano before switching to the Roland RD-1000 digital piano for Reg Strikes Back and the two albums following that. After his throat surgery in 1987, Chris Thomas would be rehired as producer. For the first time in John's career, no songs on this album are longer than five minutes.
John played "Paris" during his 1986 US tour. He included "Heartache All Over the World" and "Slow Rivers" on his 1986 Australian tour with the Melbourne Symphony Orchestra, which would eventually yield John's live album Live in Australia with the Melbourne Symphony Orchestra. "Heartache" was included in the band portion of the show (John opted not to play piano for that number) while "Slow Rivers" was played during the second half of the show with the orchestra. Due to contractual constraints, "Slow Rivers" was not included on Live in Australia, despite the fact that it was from the orchestral portion of the show, which was the basis for the album.

Though not released as a single, "Paris" would also, ironically, become a minor FM hit for some jazz stations that programmed the track.

This is John's only studio album that has yet to be remastered as of 2013. However, it is available on compact disc.