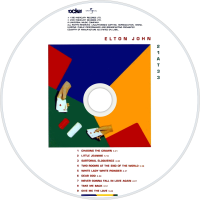 21 at 33 is the fourteenth studio album by British singer/songwriter Elton John, released on 13 May 1980. It was recorded at Super Bear Studios, Nice, France, in August 1979, and Rumbo Recorders and Sunset Sound in Los Angeles, California between January to March 1980.

The title comes from the fact that this was John's 21st album in total at the age of 33. According to the liner notes in the remastered edition of the album, the count includes all standard albums, two "Greatest Hits" compilations, two live albums, as well as the Friends soundtrack, the three-song, 12-inch EP The Thom Bell Sessions and the UK-only "rarities" collection Lady Samantha. The album sold over 900,000 copies in the United States, narrowly missing a Platinum certication.

John has not played any of the material in concert since touring in 1980, with the exception of "Little Jeannie", "White Lady White Powder" and "Sartorial Eloquence"; all three of which were performed in Central Park that same year. "Little Jeannie" was again performed at the two One Night Only concerts in 2000. Even "Little Jeannie", which was a huge North American hit, (#3 Pop and #1 Adult Contemporary in the United States, and #1 in Canada), is rarely performed. Two of John's "classic" bandmates, drummer Nigel Olsson and bass player Dee Murray, reunited with him for one song. His backup keyboardist James Newton-Howard returns and performs on almost every track as was the case on Rock of the Westies and Blue Moves. Other musicians include members of The Eagles and Toto as well as Peter Noone from Herman's Hermits.