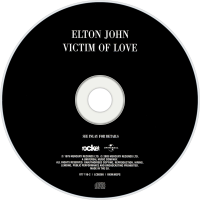 Victim of Love is the thirteenth studio album by British singer/songwriter Elton John, released in 1979.

Recorded at Musicland, Munich and Rusk Sound Studios, Hollywood, it was not critically or commercially well-received, and is his third lowest charting album to date in the US, after 1986's Leather Jackets and 1985's Ice on Fire. This is also the shortest album of Elton John's career at a shade under 36 minutes. Despite its negative reception, the album was reissued in a digitally remastered format in 2003. The only single B-side released, "Strangers," appeared as a bonus track on the previous album, A Single Man, as it was recorded during those sessions.

It is a disco album released shortly after the peak of disco's popularity. This album is truly an anomaly in John's catalog. First, he neither wrote nor played on any of the tunes; he only provides vocals. Secondly, this is the first album released by John that does not feature any of his original band members, which would not happen again until his 2010 release, The Union with Leon Russell. Lastly, this is one of only two of John's studio albums as of 2012 without a single contribution by Bernie Taupin. John's previous album, A Single Man, is the other.

When the album was released as a CD in the 80's, the tracks often got mixed up. The first 45 seconds of "Spotlight" is actually the previous track, and this error occurs in other tracks as well. This was however fixed on the 2003 remaster, which also featured improved sound and instrumental setup.