Ziggy Stardust and The Spiders From Mars: The Motion Picture Soundtrack 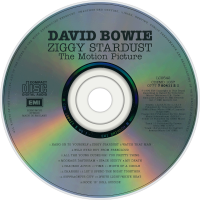 Ziggy Stardust: The Motion Picture is a live album by David Bowie, corresponding to the film of the same name. The music was recorded at the Hammersmith Odeon in London on 3 July 1973, although the album was not issued by RCA Records until 1983. Prior to that it had existed in bootleg form, notably His Masters Voice – Bowie and the Spiders From Mars' Last Stand.

The album documents the final show which Bowie performed in his Ziggy Stardust persona. Just before the final track, he announces, "Not only is it the last show of the tour, but it's the last show that we'll ever do. Thank you." Many in the audience believed that Bowie himself was retiring.

Album Review
As EMI mopped up the loose ends in the remastering of Bowie's back catalogue, this album, on paper, must have looked like a pretty grim prospect. While D.A.Pennabaker's film was (as always) an exemplary exercise in music documentary style (despite the hurried circumstances in which it was filmed), the soundtrack album was muddied, unfocussed and had the running order all wrong. Now, with Tony Visconti back to sharpen things up, we get the album that really matches Pennebaker's priceless record of the 'death' of Ziggy at Hammersmith Odeon.
It must be remembered that Bowie was, by this time, running on empty. The accompanying booklet details the Dame's tour schedule of the previous year and a half. It makes pretty grim reading. Bowie and the Spiders hadn't just toured the Ziggy show, they'd run it into the ground. In the midst of dates they'd also recorded Aladdin Sane, Dave's sonic diary of the spiralling madness surrounding his alter ego as he paraded it around the States. Such a workload had led to narcotic frenzy and an almost total disappearance of David himself. Indeed, the DVD backstage footage shows him as a man who's barely even THERE, vacantly sitting as time takes a cigarette and puts it in his mouth... Yet on stage it was this ability to disappear inside the character that made this spectacle the legend it has become. Well, that and a band honed to perfection by the very same punishing regime.
For what shines here isn't just Bowie's ability to convey the gorgeous decadence of the sexually ambivalent and voracious Stardust but also the kick-ass power of the Spiders From Mars. The late Mick Ronson's guitar was on peak form by this point. His soloing (especially during Moonage Daydream) almost beggars belief. And just remember he was doing it while pretending to be fellated by Bowie AND wearing space-age culottes! Also the line-up had expanded by now to include the rococo brilliance of pianist Mike Garson, without whom Time would have sounded far too fey. The really cruel irony was that this fine bunch didn't even know that they were about to be sacked. On stage.
The importance of this document, beyond a snapshot of glam rock at its live peak, is that Bowie was to announce his shock decision to retire from public life. One can only imagine the thoughts running through Ronson and co's heads as their meal ticket kissed them goodbye in front of the screaming hordes. Luckily for us Bowie was back within months and we still have this beautifully packed item (and its accompanying DVD) to keep those nostalgic fires burning. From the punky opening of Hang On To Yourself to the Edith-Piaf-on-mogadon hysteria of Rock 'n' Roll Suicide, it all sounds superb. Watch (and listen to) that man, indeed...