Live in the LBC & Diamonds in the Rough 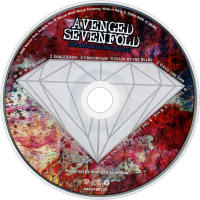 Live in the LBC & Diamonds in the Rough is the first live album and DVD package and the fifth studio album by American heavy metal band Avenged Sevenfold released on September 16, 2008 by Warner Bros. Records. The live DVD features the band's April 10, 2008 hometown show at Long Beach Arena headlining the Rockstar Taste of Chaos tour, while the CD contains previously unreleased B-sides that were recorded during the making of Avenged Sevenfold, plus various covers, and other never-before-heard material. The Rev performs vocals on the tracks Crossroads, and Flash of the Blade.
The DVD was directed by Core Entertainment's Rafa Alcantara, who also worked on the band's critically acclaimed 2007 road documentary All Excess.
On August 15, 2008, a trailer was released by Avenged Sevenfold on their YouTube channel. On September 5, 2008, Avenged Sevenfold released the live version of "Seize the Day" from the DVD through their imeem account. "Unholy Confessions" and "Scream" were later streamed before the release as well.
There are two alternate mixes of songs on their self-titled album:
The CLA Mix of "Almost Easy" is simply the original song as mixed by Chris Lord-Alge, instead of Andy Wallace. This includes the mixing of The Rev's vocal take as well as M. Shadows.
The alternate version of "Afterlife" features a different bridge and a string section throughout the entire song.
Live in the LBC & Diamonds in the Rough has been certified Platinum by the RIAA. On November 5, 2008, the CD/DVD combo was certified Gold, but has now reached Platinum by selling over 100,000 (Video Longform platinum) copies.