Attack of the Killer B's 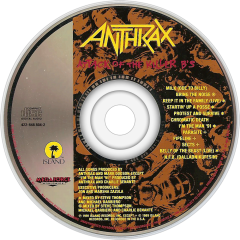 Attack of the Killer B's is a compilation album of B-sides, covers and rarities by the thrash metal band Anthrax. The album was released in June 1991 by Megaforce Worldwide/Island Entertainment. The "B's" in the album's the title refers to b-sides previously unreleased and compiled for a single release. In 1992 the album was nominated for a Grammy Award in the category Best Metal Performance.