Track List
01) Anteroom of Death
02) Until My Last Breath 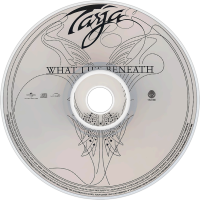 What Lies Beneath is the third album by Finnish singer Tarja, which was released on 1 September 2010 in Finland, on 3 September in Germany, Switzerland and Austria and on 14 September in Latin and North America. It is the first album in Tarja's career in which she is credited for composition on every track.
On 2008, after the first leg of the Storm World Tour, Turunen took time to compose new songs. She revealed in her blog two songs that she composed in her off time, "Wisdom Of Wind" and "Enough", both later released on the My Winter Storm Extended edition. On January 25 Turunen posted on her blog announcing the name of her follow up to My Winter Storm and talking about the album, revealing titles and lyrics.
"What Lies Beneath", which sold around 1,300 copies in the United States in its first week of release, landed at position 24 on the Billboard's Top Heatseekers, which lists the best-selling albums by new and developing artists, in Finland it ranked at 6th position after two months on the official Finnish charts, also spendind two months on the German Top 100, one and a half month on the Austrian Top 40, and a full month on the charts in Switzerland, Belgium and Greece, ending 2010 at 13th position on Billboard's Top 100 of best-selling albums in Europe.
To promote the album, Turunen started the What Lies Beneath World Tour on 12 June 2010, which ended on April 8, 2012 in Rio de Janeiro, Brazil. It included a special concert in Rio de Janeiro, Brazil, during the big international festival Rock in Rio, on 15 September 2011. Tarja's first live DVD Act I was filmed during 2 nights in Rosario, Argentina on March 30 and 31, 2012.