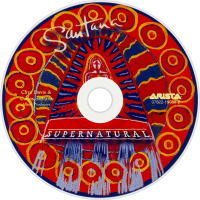 Supernatural is the seventeenth album by Santana, released in 1999. It went 15 times platinum in the US and won nine Grammy Awards, including Album of the Year as well as three Latin Grammy Awards including Record of the Year.
The album, conceived by Clive Davis and A&R'd by Pete Ganbarg, was a big global hit, eventually selling more than 30 million copies. It is the most successful album by Santana, charted in ten countries, including in the US chart, at number one.
Supernatural debuted at number nineteen on the Billboard 200 on July 3, 1999 but topped (after 18 weeks) the chart on October 30, 1999 and stayed there for 12 non-consecutive weeks. It included the hit single "Smooth", which featured Matchbox Twenty singer Rob Thomas on vocals, and was number one on the Billboard Hot 100 for 12 weeks. The follow-up single, "Maria Maria" (which featured The Product G&B), was number one on the same chart for 10 weeks. Santana and Rob Thomas won three Grammys for their collaboration on the song "Smooth" while Santana and Everlast won another for the song "Put Your Lights On". Santana also won a Grammy for "Maria Maria".
Among the other guest artists are Eric Clapton, Eagle-Eye Cherry, Lauryn Hill, Dave Matthews, and Cee-Lo.