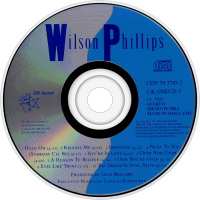 Sugary, commercial pop/rock isn't necessarily a bad thing, and in fact can be fairly enjoyable in the right hands. But Wilson Phillips are much too sweet for their own good. This debut album -- which amazingly went five-times platinum during the early 1990s -- is about as lightweight and sophomoric as it gets. Chynna Phillips' weak singing on such homogenized, mundane fluff as "Impulsive," "The Dream Is Still Alive," and the chart-topping "Hold On" isn't even remotely convincing. Compared to Phillips' saccharine performances on "You're in Love" (another major hit) and "A Reason to Believe," even Tiffany and Debbie Gibson's debut albums have some bite.