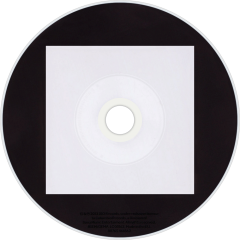 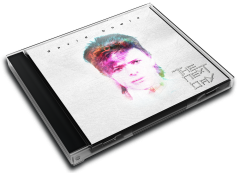 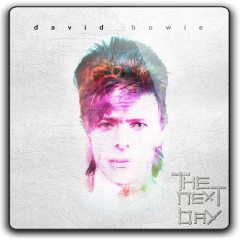 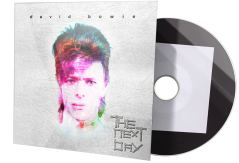 The Next Day is the twenty-seventh studio album by the English musician David Bowie, released on 8 March 2013 on Bowie's Iso record label, under exclusive license with Columbia. The album was unexpectedly announced on Bowie's sixty-sixth birthday, on 8 January 2013. Bowie's website was updated with the video for the lead single, "Where Are We Now?". The single was immediately on sale on iTunes, and the album was put on pre-sale. It is Bowie's first album of new material in ten years, since 2003's Reality, and surprised fans and media who believed he had retired. The album was streamed in its entirety on iTunes days before its official release. The album was met with critical acclaim.

Album Review
Even after 10 years away from the spotlight, David Bowie – pop’s most important post-Beatles innovator – still commands unrivalled levels of fascination.
Just when it seemed that he had slipped into a dignified retirement, which no one would have begrudged, the world awoke one morning in January to the remarkable news of not only a single, Where Are We Now?, available immediately, but also this album.
In the context of the album, Where Are We Now? – a moving, backwards glance at The Berlin Years – seems a slight red herring. Bowie does consider the past, ageing, mortality: on the title track’s chant of “My body left to rot in a hollow tree” and I’d Rather Be High’s stumbling “to the graveyard”.
How Does the Grass Grow? poses the question, “Would you still love me if the clocks could go backwards?” (You Will) Set the World on Fire seemingly addresses his pre-stardom self, a You Really Got Me riff and slick confidence reminding us that he’s always had “what it takes”. This elegiac nostalgia is matched by the beautiful You Feel So Lonely You Could Die.
A complex mood pervades elsewhere, a sense of things gone awry. The nicely sinister Dirty Boys’ expressive, serious vocal depicts a skewed Englishness of cricket bats, “Finchley Fair” and running “with dirty boys”.
The Stars (Are Out Tonight) sees those stars (a recurring theme) anthropomorphised: “sexless and unaroused”, unsettlingly “beaming like blackened sunshine”.
The most experimental cut, If You Can See Me, proclaims – amidst spacey, tumbling rhythms and scattered jumbles of notes and words – “I will slaughter your kind”.
Love Is Lost makes youth seem ominous – newness abounds but still “your fear is old”. Clearly this is no elder statesman simply wistfully gazing into a dappled, romanticised past.
Valentine’s Day and I’d Rather Be High are further standouts – the former is a mid-paced depiction of a character with a “tiny face” and “scrawny hands”; the latter, a furious anti-war song.
The closer, Heat, is a brilliant example of what makes our finest, bravest musician of the past 40 years so irreplaceable. It’s full of spaced-out vocals, ominous noises and bangs, keening strings and disturbing, impressionistic poetry.
With all the opacity and lack of easy answers that you would hope for from this most stylish and creative of artists, this is a triumphant, almost defiant, return. Innovative, dark, bold and creative, it’s an album only David Bowie could make.