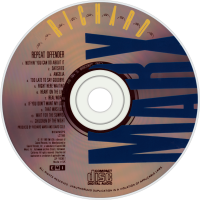 Repeat Offender is the second studio album by singer/songwriter Richard Marx. Released in mid-1989, it replaced Prince's Batman soundtrack at #1 on Billboard's album chart. The album went on to sell over four million copies in the US alone (several times that worldwide) due to three singles in the Billboard top five including two #1 hits: "Satisfied" and the platinum-selling "Right Here Waiting".

The first two singles, "Satisfied" and the platinum-selling "Right Here Waiting," both reached #1, completing a string of three consecutive No. 1 singles. When the third single from Repeat Offender, "Angelia" climbed to #4, Marx became the first solo artist to reach the Top 5 with his first seven singles. Since then, "Right Here Waiting" has been covered numerous times, most notably by Monica and 112 in a 1998 duet.

Another single from the album, "Children of the Night", was written in support of the suburban Los Angeles (Van Nuys)-based organization for runaways. It became the sixth single from Repeat Offender, and all royalties were donated to the charity.