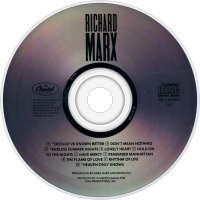 Richard Marx is the eponymous debut album by singer/songwriter Richard Marx, released in 1987. Marx became the second solo artist (the first being Whitney Houston) in recording history to reach the top three of the Billboard Hot 100 with four singles from a debut album, including his first number one Pop single "Hold On to the Nights" in mid-1988. The album's first single "Don't Mean Nothing" charted at number one on Billboard's Hot Mainstream Rock Tracks chart in 1987.

Five singles were released from the album, each of them doing well on the charts. Marx's future wife, Cynthia Rhodes, G.W. Bailey, and Fee Waybill appeared in the video for the lead single "Don't Mean Nothing". The album went to number eight on the Billboard charts and spent 86 weeks on that chart. The album was certified triple platinum. In the United Kingdom, the album entered the charts on April 9, 1988 where it stayed for two weeks peaking at number 68.

The album received praise from music critic Stephen Thomas Erlewine of the online music database website Allmusic, who stated that "Richard Marx's self-titled debut album was a finely crafted record of mainstream pop/rock" and that the album was "Filled with carefully constructed radio-ready tracks, it was no surprise that the album became a huge hit."