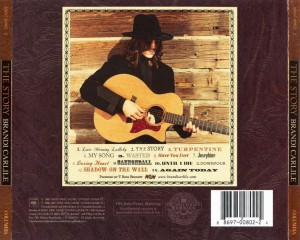 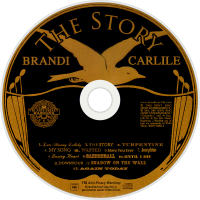 One of the most appealing qualities of Brandi Carlile's debut album was that it had an ethereal quality, unattached to style or sound or time. Since she was a singer/songwriter playing an acoustic guitar, there were undoubtedly elements of folk, but Carlile's songwriting was elliptical and elastic, giving her plenty of room to indulge her powerful voice, a voice that had echoes of Jeff Buckley and Thom Yorke. This gave Brandi Carlile a spacey, dreamy quality, but for as good as it was, the album didn't achieve much attention initially apart from some rave reviews. Still, Carlile and the label slowly worked the record, getting some songs onto Grey's Anatomy as they laid the groundwork for her second album, The Story, which was designed to be her big breakthrough. Producer T-Bone Burnett -- a singer/songwriter in his own right, but better known as the man behind O Brother, Where Art Thou? and the man who helmed records for Counting Crows, Roy Orbison, Gillian Welch, and his wife Sam Phillips -- was brought aboard to help streamline some of Carlile's eccentricities without watering down her music, a task he performs admirably on The Story. Part of the streamlining process involves accentuating the arty undercurrents that ran throughout her debut -- a move that highlights her ambition and helps push her out of the rootless ether and into something that sounds distinctly contemporary. In other words, Carlile's Buckley and Yorke influences are brought to the forefront here -- not just in her soaring, neo-operatic vocals, either, but also how her writing is at once more brooding, dramatic, and open-ended than it was on the debut -- which makes her sound modern, if perhaps a bit too indebted to her idols. If Carlile openly wears her influences on her sleeve on The Story, she is nevertheless the rare songwriter who can hold her own with such idiosyncratic talents. Indeed, there's an earthiness to her music that keeps it from floating into willfully abstract territory, and if Burnett's dark, burnished production is a shade too dour -- this broods like it was 1995 -- it nevertheless is appropriate, capturing the mournful qualities of Carlile's songs and voice, along with the muscle the twin Hanseroth brothers bring as her support. The album's only flaw is that it's perhaps a little too monochromatic, a little too somber and sober in its presentation; a slight glimmer of sunlight or a dose of humor would have given this record some needed breathing room. That said, this dark, roiling collection fulfills the promise of her remarkable debut, offering resounding confirmation that Carlile is a singular talent.