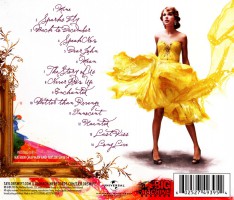 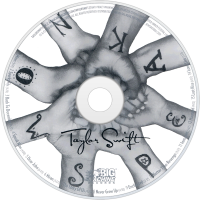 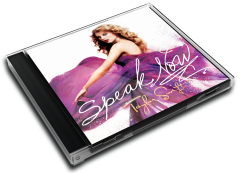 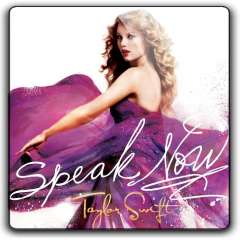 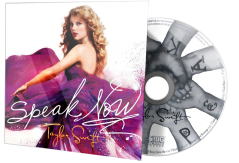 Speak Now is the third studio album by American singer–songwriter Taylor Swift, released on October 25, 2010, by Big Machine Records. Production for the album took place during 2008 to 2010 at several recording studios, and was handled by Swift and country music producer Nathan Chapman. Written entirely by Swift as the follow-up to Fearless (2008), Speak Now expands on the country pop style of her previous work, and features lyrical themes concerning love, romance and heartbreak. A deluxe edition was released on the same day exclusively to US Target stores; it contained three extra bonus tracks and two acoustic versions as well as a pop remix of "Mine". Internationally, another deluxe edition was released containing the same three bonus songs and acoustic songs, and three US versions. In 2012, the Target exclusive was released to a wider distribution in the US.

Speak Now received generally positive reviews from music critics, who complimented Swift's songwriting and themes. The album debuted at number one on the US Billboard 200 chart, selling approximately 1,047,000 units in its first week. Due to strong digital sales, all 14 songs from the standard edition of the album charted on the Billboard Hot 100, with the lead single "Mine" having the highest peak of number three. The album was also an international success, charting within the top 10 in several countries, including Australia, Canada, and the United Kingdom.

Swift promoted the album with an international tour, Speak Now World Tour, throughout 2011. According to Swift's label Big Machine Records, as of September 2011, Speak Now has sold over five million copies worldwide. The album has been certified quadruple platinum by the Recording Industry Association of America (RIAA) and, as of October 2012, has sold 4.2 million copies in the United States.

User Album Review
They grow up so fast these days, don’t they? Having taken the lion’s share of the writing credits on 2008’s mammoth-selling Fearless, all of the songs on Taylor Swift’s new album are self-penned, betraying the sort of accomplishment that should keep her sitting pretty in the rock firmament for as long as she likes. Still only 20, that could be a mighty long time.

Although Nathan Chapman is still in the producer’s chair, there’s a perceptible, sonic move away from Nashville; the shift had clearly begun on Fearless, managing the crossover to the global mainstream with ease, but Speak Now plugs a sturdy marker in the pop-rock soil. On current single and terrific opening track Mine, the slide guitar is buried so deep in mix, it’s almost apologetic – or even a joke at the expense of Swift’s roots. But the twang in her voice is here to stay, somehow reinforcing the emotional heft of her homespun tales of teen love and loss.

Those preoccupations remain to the fore, yet a creeping maturity is plain. On serene ballad Dear John, Swift wonders, "Don’t you think 19’s too young to be played by your dark, twisted games?", and later, on the spidery Innocent, she sighs, "It’s okay, life is a tough crowd". This is a more bruised writer than the young Juliet on Love Story. Last Kiss is heartbreaking ("You told me you loved me so why did you go… away?"), a lump in the throat to a music box waltz. Nestled amid all the love and regret, however, are sunburst pop nuggets like Never Grow Up and Enchanted that would brighten any daytime radio playlist. And on closer Long Live, personal reflections take on a more triumphant tone, a late shot of versatility that underlines Swift’s narrative skill.

Talent to burn has its own pitfalls, of course. At 14 songs – and most comfortably over four minutes – Speak Now is too long, and when you’ve heard half a dozen perky laments you’ve heard, well, quite a lot. Swift is less convincing too when practising a snarly edge on Better Than Revenge or letting rip with her overwrought inner Bonnie Tyler on Haunted, but these only jar because quality elsewhere is so high. With some judicious – let’s have it then – tailoring, this is a sparky and affecting record, moving Swift on at a stately and assured pace.