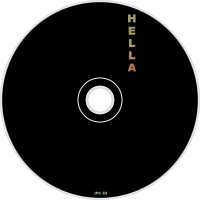 There's No 666 in Outer Space is the fourth full-length album by math rock band Hella. It is the follow-up to Church Gone Wild/Chirpin' Hard and was released by Ipecac Recordings on January 30, 2007. It is the first Hella album to feature an expanded five-member line up and is also the first to feature vocals on every track.