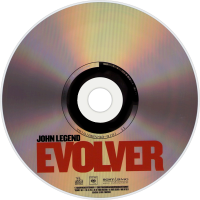 Evolver is the third studio album by R&B/soul singer John Legend, released by GOOD Music and Columbia Records on October 28, 2008 in the United States and on October 20 in the United Kingdom. It features guest appearances by Kanye West, Brandy, Estelle and Andre 3000, among others.

The album debuted at number 4 on the U.S. Billboard 200 to sales of 132,823 copies. It also entered the UK Albums Chart at number 21, and reached number 26 on the national Japanese albums chart, as well as number 5 on the Japanese foreign chart. The album has received positive reviews from music critics. Since the album's release, it has sold 617,528 copies in the U.S. and has been certified Gold by the RIAA.

In May 2009, the song "This Time" was featured prominently in the closing scenes of the third season finale of the CW/BET comedy-drama television series The Game.

Album Review
As the owner of possibly the sexiest voice in music, John Legend has got it going on. Now releasing his third album shows that he's lost none of the magic that gave his debut, Get Lifted, such crossover appeal. Here in the UK, we've now got a special soft spot for John thanks to him signing Estelle and transforming her into a superstar. She returns the favour by lending her vocals to the reggae tinged 'No Other Love'. Being John Legend, it's not hard to attract guest stars, but we're impressed that Evolver manages to avoid overcomplicating with so many 'featurings' that the main artist is relegated to second place. The other chosen two are Andre 3000, throwing a futuristic spanner into the unusually upbeat Green Light and a vocoded Kanye helping him ditch his lady in We're Over. Impressive.

Confirming his position as an elegant ladies' man, the dreamy Good Morning leaves us feeling that we couldn't turn down any request made by this man. His seductive qualities are further cemented as he tries to turn his best friend into his lover in Cross The Line, begging her to stop, ''dancing 'round the moment''. It's not all love and ladies though - a fierce Obama campaigner, the album ends on an epic note with If You're Out There. Originally performed at a Democratic convention, John rallies his listeners to change the future and, ''stand up and say it loud''.

Although we might miss the piano solos that made songs like Ordinary People such classic show stoppers, Evolver is a colourful burst of soul. Packed with incredible melodies and exquisite arrangements it's yet another step to further confirm Legend as one of the most talented songwriters of the moment.