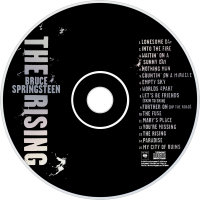 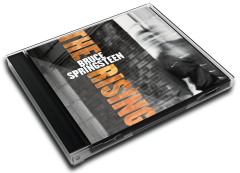 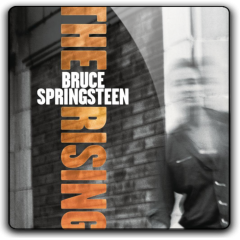 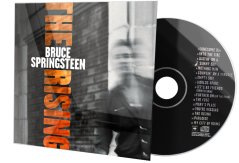 The Rising is the 12th studio album by American recording artist Bruce Springsteen, released in 2002 on Columbia Records. In addition to being Springsteen's first studio album in seven years, it was also his first with the E Street Band in 18 years. It is centered around Springsteen's reflections on the September 11, 2001 attacks.
Upon its release, The Rising was a critical and commercial success, and hailed as the triumphant return for Springsteen. It debuted at #1 on the Billboard 200 chart, with first-week sales of over 520,000 copies. With this, Springsteen became the oldest person to achieve a first-week sales of over a half of a million copies in the United States[citation needed]. The album also garnered a Grammy Award for Best Rock Album in 2003; although nominated for the Album of the Year award as well, it was beaten by Norah Jones' debut album Come Away with Me. Title song "The Rising" was also a Grammy nominee and recipient.
For the year 2002, The Rising was one of only two albums to receive Rolling Stone's highest rating – five stars – the other being Beck's Sea Change. The magazine also ranked the album #15 on its list of 100 Best Albums of the Decade. In 2012, it was rated #424 on the 500 Greatest Albums.