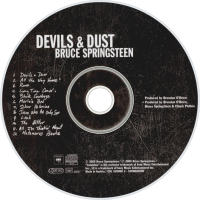 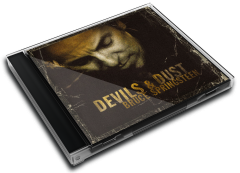 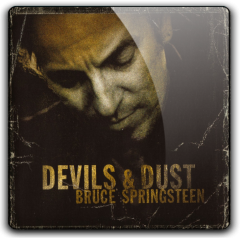 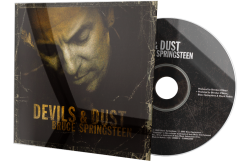 Devils & Dust is the 13th studio album by American recording artist Bruce Springsteen, and his third folk album (after Nebraska and The Ghost of Tom Joad). It was released on April 25, 2005 in Europe and on April 26 in the US. It debuted at the top of the US Billboard 200 album chart.
Springsteen was very open about the fact that many of the songs from Devils & Dust dated back a decade (or more).
Springsteen wrote the song "All the Way Home" for Southside Johnny to use in his album Better Days which was released in 1991. The songs "Long Time Comin'" and "The Hitter" were written and performed during Springsteen's solo Ghost of Tom Joad Tour in 1996. "Devils & Dust" is also known to have been written previously, and was featured in soundchecks during The Rising Tour beginning in the summer of 2003 and the following year during the Vote for Change Tour in late 2004. (Springsteen had "Devils & Dust" on his set list for at least one Vote for Change show, but at the last moment decided to perform a 12 string guitar rendition of the "Star Spangled Banner", which he would later release for free through his official website).

Grammy Awards:
Springsteen received five Grammy Award nominations for this work, three for the song "Devils & Dust", Song of the Year, Best Rock Song, and Best Solo Rock Vocal Performance, and two for the album as a whole, Best Contemporary Folk Album and Best Long Form Music Video. His sole award came for Best Solo Rock Vocal, an award he garnered in previous years for "Code of Silence" and "The Rising".

During the February 8, 2006 Grammy telecast, Springsteen gave an impassioned live solo performance of "Devils & Dust", adding on "Bring 'em home" at the finish, then immediately turned and left the stage without staying to receive his partial standing ovation. His Grammy appearance was somewhat reminiscent of his performance of "My City of Ruins" during the post-September 11, 2001 America: A Tribute to Heroes telethon.

User Album Review
My CD player has turned into a rock critic. No sooner was the Devils And Dust album loaded than the display was protesting "BAD DISC". Sadly no-one at Sony Music seems to have had the guts to tell The Boss that.
This is his 13th studio album and that's unlucky for the millions of devotees who will have bought it on trust, only to find it's a self indulgent rag bag of second rate songs. If you're not already into Springsteen please don't start here.
Because you won't find the trademark poetry and pathos of songs like "Atlantic City", "The River", "Racing In The Street" or "Thunder Road". You won't hear his distinctive delivery as he flirts with Neil Young style falsetto, Dylan-esque mumbling, and the summery sound of Mungo Jerry. Yes, listen out for "In the Summertime" Springsteen style.
This must be his Woodie Guthrie tribute album. Having turned his back on the urban post industrial decay of the East Coast (oh get me!)he's sadlled up and, accompanied by the likes of the Nashville Strings, headed out West. The trail leads us through the rugged mountains and sparkling streams of the "Caroline", the swamps of Louisiana, and the open plains of Oklahoma and Texas. We even find him, trousers down, in a Nevada whorehouse.
Cars have been replaced by prancing ponies. Meanstreets by stony tracks, the Jersey shoreline by the Rio Grande. Even Mary, his love interest in so many of his songs has gone TexMex.She's now Maria. So grab your favourite cowboy/girl, crack open a bottle of bourbon, sit out under the stars and enjoy. Because, with some really neat picking, great Steve Earle style guitar licks and fine fiddling this "Bruce-lite album" is a great sound.
Shame that the guy who gave us "Born To Run" thirty years ago in November, seems to have run out of steam.