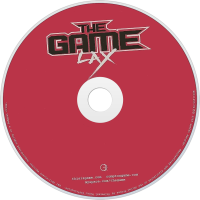 LAX is the third studio album by American rapper Game, released August 26, 2008 on Geffen Records. He had originally announced that Dr. Dre would be producing for the album, but neither Dr. Dre nor Aftermath Entertainment had confirmed. Production for the album was contributed by longtime collaborators Cool & Dre, Kanye West, Scott Storch, Nottz, Hi-Tek, and JellyRoll, among others. Guests featured on LAX include Chrisette Michele, Common, Keyshia Cole, Ludacris, Nas, Ne-Yo, Raekwon, Raheem DeVaughn, Travis Barker, Bilal, and Lil Wayne. The album was released with 2 different cases such as one on the deluxe version with Game looking at the camera with his Bandanna in his hand and another with him sitting on a couch smoking a blunt.
LAX debuted at number two on the US Billboard 200 chart, selling over 238,000 copies in its first week, just behind metal band Slipknot's All Hope Is Gone. At first it looked like LAX had debuted ahead of All Hope Is Gone by 13 copies; with such a close difference, Slipknot's labels Warner Music Group and Roadrunner Records asked for a SoundScan recount, a historic first. Nielsen proceeded to the recount, which placed LAX at number two with 238,382 copies, and Slipknot in first position with 239,516 copies scanned, a margin of 1,134 copies.
Initially, Billboard published an article stating that The Game had secured the top spot with a margin of 13 units, in what was described as the "closest race for number one since SoundScan began tracking Data in 1991". After a recount 12 hours later, the article was rewritten and Slipknot was awarded the number one spot, having sold 239,516 units. As of September 2011, the album has sold 765,000 copies. Upon its release, LAX received generally favorable reviews from most music critics, with music critics praising the album's production.