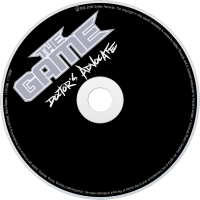 Doctor's Advocate is the second studio album by West Coast rapper Game, released on November 14, 2006 through Geffen Records. Due to his disputes with 50 Cent, Game left Aftermath/G-Unit and signed with Geffen Records another label under Universal Music Group's Interscope-Geffen-A&M division to terminate his contractual obligations with G-Unit in the summer of 2006.
Despite the absence of Dr. Dre, who executive produced Game's debut record, The Documentary, the album featured production by four other returning producers—Kanye West, Just Blaze, Scott Storch and Hi-Tek—as well as will.i.am and Swizz Beatz. Production for the album was also contributed by DJ Khalil, Jellyroll, Jonathan "J.R." Rotem, Mr. Porter, Nottz, Reefa, Ervin "E.P." Pope and D-Roc, among others.
Doctor's Advocate debuted at number one on the U.S. Billboard 200, selling over 358,000 copies in its first week, making it Game's second number one album in a row. According to The Game himself and Geffen Records, the album has sold nearly 3,000,000 copies worldwide.
Guests featured on Doctor's Advocate include Busta Rhymes, Kanye West, Nas, Nate Dogg, Snoop Dogg, Tha Dogg Pound, Jamie Foxx and Xzibit. Upon its release, the album received favorable reviews, with music critics praising the album's production. Game made a point to prove that he could still make good music and be a successful artist, as he did on The Documentary, without the help from Dr. Dre or 50 Cent. As with The Documentary, Doctor's Advocate was distributed in the United Kingdom by Polydor Records, which is the British distributor for Interscope-Geffen-A&M releases. Game called Doctor's Advocate the best album of his career. When Game signed onto Aftermath Entertainment, it was later arranged that he would work with 50 Cent and his hip hop group G-Unit. The sudden feud between the pair, who had been marketed as having a mentor/protégé relationship, started soon afterwards. The two were able to put their differences aside for the release of The Game's debut album, The Documentary which was released on January 18, 2005. The album was a success for Game and had three singles that featured 50 Cent. The release date of 50 Cent's second album, The Massacre, was pushed back in order to accommodate Game's album, causing a rift between 50 Cent and Interscope Records. Tensions would rise during the filming of the music video for Game's third single, "Hate It or Love It", when 50 Cent refused to shoot a scene in the front seat of a car with Game, instead sitting in the back (Game's brother, Big Fase 100, would replace him).
50 Cent later dismissed Game from G-Unit on Hot 97 radio. 50 Cent also claimed that he was not getting his proper credit for the creation of Game's debut album and he claimed that he wrote six of the songs, which Game denied. After the announcement, Game, who was a guest earlier in the evening, attempted to enter the building with his entourage. After being denied entry, one of his associates was shot in the leg during a confrontation with a group of men leaving the building. When the situation escalated, both rappers held a press conference to announce their reconciliation. Fans had mixed feelings as to whether the rappers created a publicity stunt to boost the sales of the albums they had just released. Nevertheless, even after the situation deflated, G-Unit criticized The Game's street cred. The group denounced The Game and announced that he will not be featured on their albums. During a Summer Jam performance, The Game launched a boycott of G-Unit called "G-Unot".
After the performance at Summer Jam, Game responded with "300 Bars and Runnin'", an extended "diss" aimed at G-Unit as well as members of Roc-A-Fella Records on the mixtape You Know What It Is Vol. 3. 50 Cent responded through his "Piggy Bank" music video, which features The Game as a Mr. Potato Head doll and also parodies other rivals. Since then both groups continued to attack each other. The Game released two more mixtapes, Ghost Unit and a mixtape/DVD called Stop Snitchin, Stop Lyin.
G-Unit posted a cover of Game's head on the body of a male stripper for "Hate It or Love It (G-Unit Radio Part 21)" mixtape, as a response to Game displaying pictures of G-Unit dressed as Village People. Although he was signed to Aftermath Entertainment, The Game left the label Due to his disputes with 50 Cent and signed with Geffen Records (another label under Universal Music Group's Interscope-Geffen-A&M division) to terminate his contractual obligations with G-Unit in the summer of 2006 (although others claim 50 Cent pressured Dr. Dre to kick him off). G-Unit member Spider Loc had also begun to insult The Game on various songs. In addition, The Game released "240 Bars (Spider Joke)" and "100 Bars (The Funeral)" both attacking G-Unit, Spider Loc and others. 50 Cent's response was "Not Rich, Still Lyin'" where he mocks The Game. Lloyd Banks replied to the Game on a Rap City freestyle booth session. The Game quickly released a "diss" record called "SoundScan" where The Game pokes fun at Lloyd Banks' album Rotten Apple falling thirteen spots on the Billboard 200 chart and disappointing second week sales. Lloyd Banks replied on his mixtape Mo' Money In The Bank Pt. 5: Gang Green Season Continues with a song called "Showtime (The Game's Over)". Lloyd Banks states that 50 Cent wrote half of The Game's first album The Documentary and pokes fun at The Game's suicidal thoughts.
In October 2006, The Game extended a peace treaty to 50 Cent, which was not immediately replied to.[16] However, a couple days later, on Power 106, he stated that the treaty was only offered for one day.[17] On The Game's album, Doctor's Advocate, he claims that the feud is over on a few of the songs.