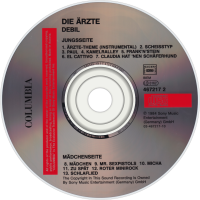 Debil ("Moronic") is the first full-length studio album by Die Ärzte, released in 1984, following the EPs Zu schön, um wahr zu sein! and Uns geht's prima.... The songs "Paul" and "Zu spät" were released as singles, without being successful initially. However, a live version of "Zu spät" was released as a single from the live album Nach uns die Sintflut in 1989 and became a moderate hit in Germany.

In 1987, the Bundesprüfstelle für jugendgefährdende Medien (Federal Department for Media Harmful to Young Persons) put the songs "Claudia hat 'nen Schäferhund" and "Schlaflied" on the List of Media Harmful to Young People, with the effect that they could not be sold to minors, nor publicly advertised or displayed. This ban was lifted in 2004, which led to the subsequent reissue of the album.