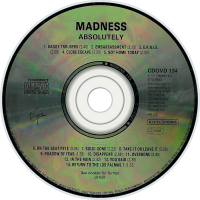 Absolutely is the 1980 second album from the British ska band Madness. It peaked at #2 in the UK album charts.
The album is named after one of expressions of the band's then tour manager, and sound man Tony Duffield. The front cover sees the band standing in front of Chalk Farm tube station in Camden. The inner sleeve features a London Underground-style roundel for a railway station called "Cairo East" on one side (this roundel later reappeared in the video for "(Waiting For) The Ghost Train" and a history of the group on the other.
In 2009 and 2010, Madness re-released their entire back catalogue of studio albums up until 1999's Wonderful with a bonus CD and extra tracks. The re-release of Absolutely has seven bonus tracks plus an additional CD featuring a 1980 concert recorded at the Hammersmith Odeon.