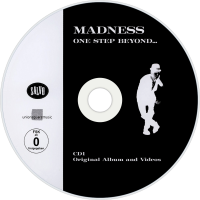 One Step Beyond... is the 1979 debut album by the British ska group Madness. It was ranked 90th in a 2005 survey held by British television's Channel 4 to determine the 100 greatest albums of all time. The album peaked at number 2 and remained in the UK Albums Chart for over a year. It was the first album produced by the team of Clive Langer and Alan Winstanley, who would go on to work with artists such as Elvis Costello and the Attractions, Morrissey, Dexys Midnight Runners and They Might Be Giants, as well as producing all but one of Madness' subsequent albums.
The title track, released as a single, was originally written and recorded by the Jamaican ska musician Prince Buster. The spoken line, "Don't watch that, watch this" in the intro is from another Prince Buster song, "The Scorcher." It was their second single after "The Prince" which was a tribute song to this musician. The song heard between the two last titles on the album's original track list is "Madness", a cover of the Prince Buster song. While it is not listed on the UK LP sleeve or label, it was appended to the U.S. Sire LP release and later releases on CD. This recording is different from the version found as the B-side of the "The Prince" single.

Album Review
History will rightly remember Madness as one of Britain’s greatest ever singles groups, but it’s on their albums that the Nutty Boys fully displayed their kaleidoscopic mastery of pop. Their first – reissued to celebrate its 30th anniversary, and including a second disc of B sides, Peel Sessions, videos and rarities – One Step Beyond… saw Madness commit to tape a raucous live show that had already won them a committed following across the pubs of their native north London.
Their debut single The Prince, originally released on Two-Tone (and rerecorded here, with an excellent dubby coda and extended sax solo from Lee ‘Kix’ Thompson), placed the septet firmly alongside kindred ska-revival spirits like The Specials. But Madness had other strings to their bow, their sound a Doc Marten-ed hybrid of soul, rockabilly, music hall, 60s pop, British sitcom and whatever else the group’s seven performer/songwriters had happened upon up ‘til that point. Indeed, Madness’s eclecticism soon became their trademark, along with their wildly exuberant personalities, Mike Barson’s thunderous piano chords, Thompson’s squawking sax, Chris Foreman’s genre-hopping guitar heroics (twanging like Dick Dale in Trenchtown on The Prince, chiming like The Byrds on Bed & Breakfast Man), and the droll delivery of frontman Suggs.
The three smash-hit singles that open the album segue from lunatic runaway-train ska (One Step Beyond), to forlorn and vulnerable mope-pop (My Girl), to eerie B movie exotica (Night Boat To Cairo), a wildly varied attack that saw Madness easily invade the higher reaches of the charts. From here, the album ricochets even more wildly, between sleazy, noir-ish STD stories (Razor Blade Alley), gonzo Tchaikovsky covers (Swan Lake), winning rock’n’roll pastiches (Rockin’ in A-flat), and a tale of underwear-thievery that plays out like a macabre Benny Hill sketch (In the Middle of the Night).
At times, One Step Beyond… seems so wild a jamboree of song that the whole shebang should just collapse into chaos. But thanks to the able and whip-smart work of production duo Clive Langer and Alan Winstanley – collectively, the George Martin to the Maddies’ Beatles – and the abundant energy and charisma of the group in their early prime, its chaotic carnival proved a triumph. And while later albums saw the group’s songwriting skills further blossom and mature, the vaudevillian nuttiness of their debut set hasn’t diminished over the decades.