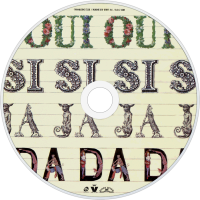 Oui Oui Si Si Ja Ja Da Da, which translates as "Yes Yes Yes Yes Yes Yes Yes Yes" from French (Oui Oui), Spanish/Italian (Si Si), German/Dutch/Swedish/Danish (Ja Ja) and Russian/Ukrainian/Romanian/Croatian/Serbian/Macedonian (Da Da), is the tenth studio album by the British band Madness, released on their own Lucky 7 Records label through Cooking Vinyl in the UK on 29 October 2012 and in the US on 13 November 2012. The album cover is by Peter Blake (best known for creating the artwork for Sgt. Pepper's Lonely Hearts Club Band) and features rejected titles for the album crossed out.
The album was preceded by a 'teaser' song, "Death of a Rude Boy", available as a digital download from 12 August 2012 (along with a remix by Andrew Weatherall), and the official first single from the album "My Girl 2", available as a digital download from 30 September 2012.
Oui Oui Si Si Ja Ja Da Da debuted at number #10 in the UK Albums Chart on 4 November 2012, becoming Madness' seventh studio album out of ten to reach the top 10 in the UK. It received favourable reviews in Q, Mojo, The Arts Desk and London evening newspaper Evening Standard amongst others, the notable exception being a poor review in the NME.
"Never Knew Your Name" was the second single of the album, released in January, 2013. Early that month it was added to the BBC Radio 2 A list (high rotation), making the song their biggest airplay hit since 1999's Top 10 hit Lovestruck. Never Knew Your Name reached UK Airplay Chart Top 25. After performing the song on the Jonathan Ross show on January 19, the album stormed back into the Amazon Album Top 3 and iTunes Top 20. It re-entered the UK Album Top 75 at #16 on January 27.
On February 22, 2013 Chris Evans debuted 'How Can I Tell You' as the new (3rd) single from the album during his Breakfast Show in which Suggs was his guest.
Guitar player Chris Foreman mentioned a planned box set version of the album, expected to be released in May 2013. It is expected to contain outtakes like Can't Keep A Good Thing Down, 1978 and Crying. On February 28th, it was revealed the album would be rereleased in a deluxe version, containing 70 songs in total, including various originals not included on the album, a series of band demos and remixes, a John Lennon cover and a DVD of the band's performance of the album at the Butlins House Of Fun Weekender from 2011, along with a live CD of the following year's gig. The latter CD also features Foreman's karaoke version of the Beastie Boys' 'Fight For Your Right To Party' and Ian Dury's 'Sex And Drugs And Rock And Roll'.
The deluxe version features new artwork, featuring the band in various fancy dress costumes representing the different rejected titles for the album, in a similar vein to the cover of their The Rise And Fall album from 1982. It is also notable for being the first appearance on a record sleeve of Sir Peter Blake, who has never featured on any album artwork despite designed some of the most celebrated record sleeves in British music history.