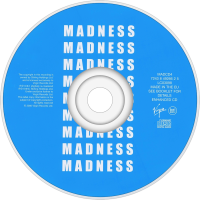 The Rise & Fall is the fourth album by the British ska/pop group Madness. This album saw Madness at their most experimental, exhibiting a range of musical styles including jazz, English music hall, and Eastern influences. NME described it at the time of its release as "The best Madness record." It has often been retrospectively described as a concept album. Although initially conceived as a concept album about nostalgia for childhood, the concept was eventually dropped, though the original theme is still evident particularly in the title track and the album's major hit "Our House." This theme was also mentioned recently when interviewed as part of T in the Park highlights, where Suggs said that all the band members were told to write about their childhood memories for the Rise & Fall (although he did say that Barson got the wrong idea, and went off and wrote about New Delhi). Although the band had previously been avowedly apolitical, the track "Blue Skinned Beast" was an overt satire on Prime Minister Margaret Thatcher and her handling of the Falklands War, paving the way for more political comment on subsequent Madness albums.
Though the album was never released in the USA, several tracks were later placed on the compilation Madness, including the melancholic pop of "Our House".